I was looking forward to the blogger dinner – the uncensored fun of sharing dishes at one of the most talk-about restaurants with a few fellow food bloggers, is pure gold! For our holiday gathering,  I was surprised that the suggestions of the Gastown-popular Coquille and the revisit of the classic, Le Crocodile both fell through. The name of “Ugly Dumpling” came up. I wasn’t paying too much attention anyway as I was busy for my Asian trip in most of the December.

So here we are, sitting at Ugly Dumpling on Comercial Drive. And soon I realized this location used to be occupied by Merchant’s Oyster Bar, which later became, Merchant’s Workshop. The restaurant has a nice size and could be potentially bigger in the summer with the patio space. There might be added details at the new restaurant, but it does not look entirely different what I could vaguely remember of the former eatery.

Like most of the farm-to-table restaurants, the food menu changes based on the availability of the seasonal organic ingredients from the local farms. Chef co-owner Darren Gee is the one-man show in the kitchen. With Farmer’s Apprentice, Kinome and Le Crocodile on his resume, Gee is ready to impress with his own style of cooking,  with a bit of the Asian root and a lot of the classically trained experience.

There is a blackboard that lists the featured drinks, daily dumpling, and other daily specials.

The beverage program, curated by co-owner/sommelier Van Doren Chan, has a focus on sake, but sherry, wine, cider, and local craft beer are also available, and so are some house-made kombucha and soda. They believe that sake would be great for pairing with food from East Asia, especially from Japan, and sherry would be perfect to counter the bold Southeast Asian flavours.

And let’s talk about the theme of “Ugly Dumpling”. This is not at a dumpling house, but the dishes are inspired by the humble looking comfort food in Asian family kitchens. But to me, this sounds extremely ambitious. Visuals are always part of the experience of eating, and the sensory pleasure of enjoying food relies heavily on the looks. Even a lot of the street food has the mouth-watering looks that contribute to the eating. Nevertheless, I was looking forward to the 10-course omakase tasting menu of the evening.

I started with some junmai sake. The Kagatobi ‘Gokkan’ (300ml, $32) delivers a delicate and slightly fruity profile but with a dry finish, great with light savoury dishes.

So we were presented some Chinese Homemade Pickles to munch on before the meal. They were good but remembered as water-downed kimchi with hardly any distinct flavours.

The first trio of appetizer courses hit the table looking very familiar. I felt like sitting at an old dinner years ago at Farmer’s Apprentice. The Marina’s Gold Oysters was topped with pickled grape and fresh horseradish became the first highlight of the evening. The Winter Greens Salad looked colourful with thinly sliced Asian Pear, pickled radish, and bonito flakes, but it was not memorable. And I found way too much crunchy texture in the Spicy Marinated Burdock Salad, my mouth felt tired after chewing on a couple slices of the fibery burdock root.

The next dishes were very plain in colour so I was expecting big flavours, or some kind of contrasting wow factors. However, I wasn’t sure the purpose of the Pork, Duck & Mushroom Pate with Persimmon Relish. Since there’s no bread or other starchy dishes to go with it, I supposed it was light enough to be eaten on its own. But isn’t pate supposed to give this rich and luscious texture? I could barely taste the soy bacon & sour cabbage in the Steamed Radish Cake and it seemed extremely plain in flavour and texture, even though it reminded me of the Radish Cake in dim sum a little bit. The Steamed Tofu and Shirako with XO Sauce and Ginger sounded more exciting than it looked, as shriako is the Japanese word for salmon sperm sac. But it was just okay and less memorable than expected.

The next dishes were much tastier!

The Daily House Dumplings had a filling of pork, spicy cod roe, and cheese. But I could imagine the amount of cod roe and cheese was very little, but it was good enough to make the pork dumplings interesting and delicious.

The Tamarind Glazed Whole Lemon Sole, Komatsuna is definitely one of my favourite dish of the evening. The sweet and sour sauce was striking a home run with such a great flavour that’s not overpowering the sweetness of the fresh fish.

The other meat dish totally reminded me of my Cantonese home. The 3-Week Aged Whole Quail was garnished with turnip, ginger, and scallion.  The aging process gives the meat a strong flavour that’s similar to prosciutto or “lap” product in Cantonese cooking. There was a lot of meat on those quails, and it was a satisfying dish if you enjoy eating meat.

The Housemade Tantan Ramen concluded the savoury part of the menu, and it was quite pleasing on the palate. It has what it takes to make good tantan noodle, the creamy and nutty tantan sauce that gives the noodles a  luscious finish. But I wish there were something more to make the tantan noodles stand out from all the tantan noodles I have tried.

Although I prefer my dessert not too sweet. But I was hoping the Steamed Black Sesame Cake much sweeter in this case. In my mind, the slightly bitter nuttiness in black sesame always goes well with the sweet taste.

The Red Bean & Yuzu Marble Cheesecake was very subtle in flavours as well. 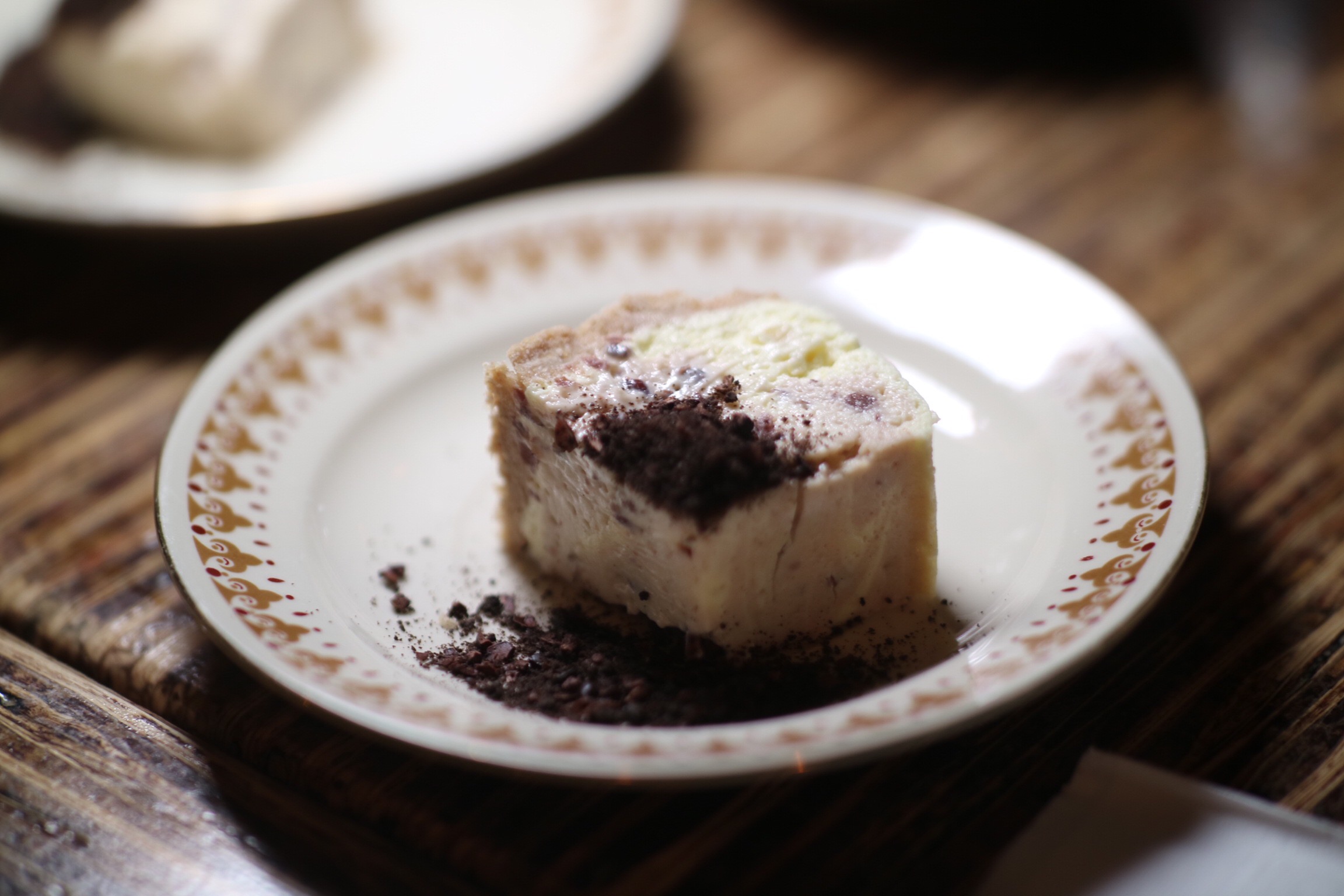 I can’t help comparing Ugly Dumpling with another restaurant where the kitchen is also run by one person, the Crowbar. Also priced at $60, the omakase tasting menu done at the Fraserhood restaurant seems bigger and bolder, filled with a ton of creativity that impresses. Here at Ugly Dumpling, the chef has chosen a direction that is close to the Asian root, but maybe holding on to the concept a little too tight, making the dishes rather pedestrian, especially for the diners are familiar with Asian food.  In a city full of diners that are well educated in Asian cuisine, this is not super exciting. The dishes here aren’t supposed to pretty, but they don’t look ugly enough; the dishes are supposed to be delicious, which they are, but they are just not amazing enough; either way, the dishes were not that successful to have the audience connected with the “ugly” theme.  However, the talent is showed in the cooking, which is undeniable. I hope they are going to fine tune the menu, and showing us more tasty surprises .